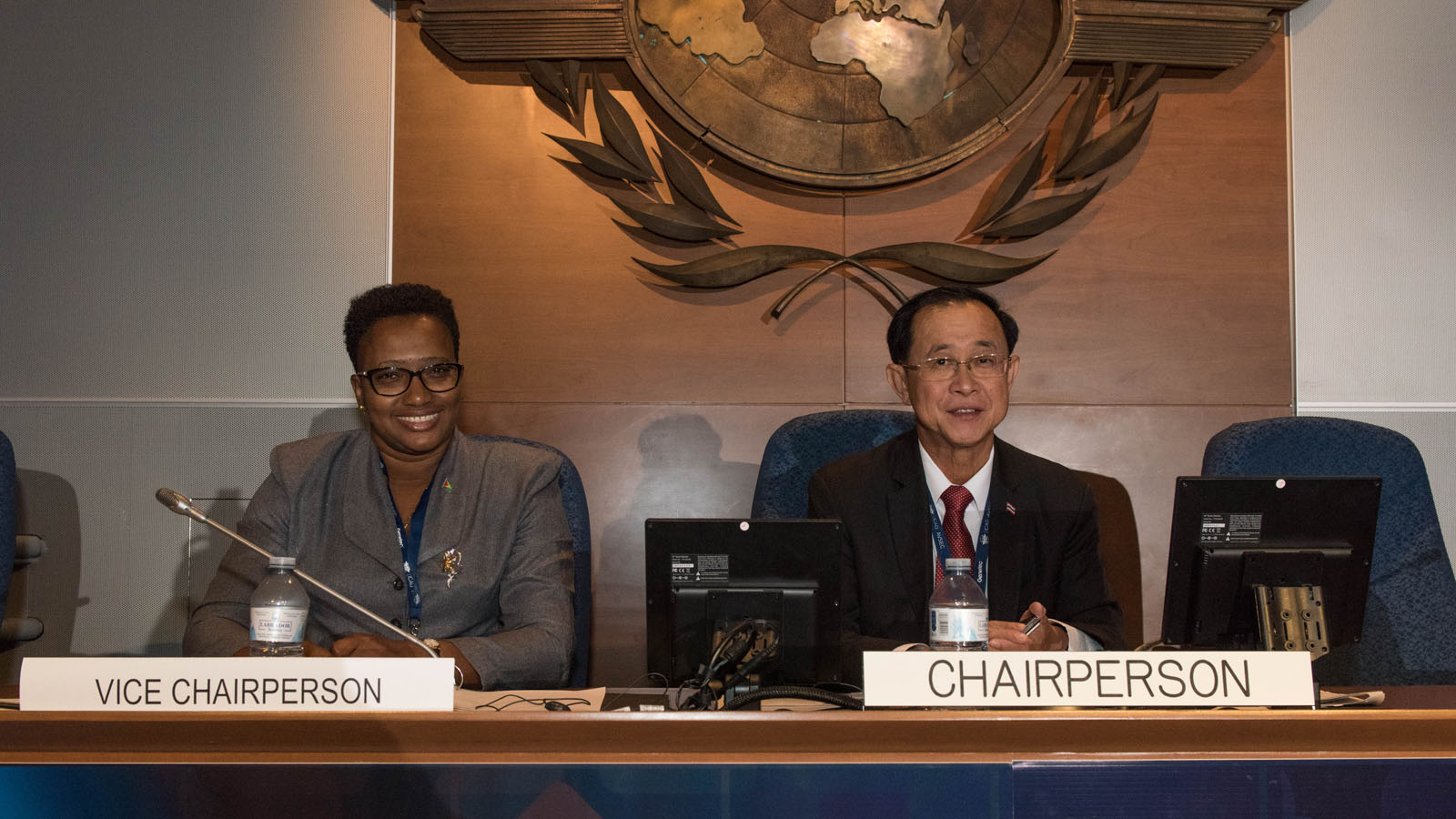 Guyana, the ‘Land of Many Waters’ was again placed in the spotlight of the World-Stage when, upon the conclusion of the ICAO Air Transport Meeting held in Guyana during November 21 – 23, 2018, the President of ICAO, Dr. Olumuyiwa Benard Aliu, invited the Honourable Minister Annette Ferguson, Minister within the Ministry of Public Infrastructure, to hold the post of Vice-Chairperson for ICAO’s Second High-Level Conference on Aviation Security (HLCAS/2). The Conference was held at the ICAO Headquarters in Montreal, Canada during November 29th and 30th 2018.

In light of current as well as new and emerging threats and risks to civil aviation operations regionally and globally, the HLCAS/2 was convened this year (2018) to further develop new approaches for managing risks and mitigating against the threats as well as to discuss the development of broad policy-guidelines to strengthen the global aviation security framework and to review propositions and actions by various member-States regarding their efforts to safeguard or protect civil aviation from acts of unlawful interference and/or acts of terrorism.

The Second High-Level Conference also examined the status of the Global Aviation Security Plan (GASeP) which was introduced by ICAO and adopted in 2017 to provide a roadmap for member-States to develop their aviation security system as well as to develop their oversight mechanisms to ensure that the global and regional security systems were performing effectively and were integrated and sustainable across the various regions.

The Conference also reported on the level of compliance of States in the seven (7) regions and noted that as at August 2018, only 116 countries reached or exceeded ICAO’s 65% goal of Effective Implementation for Security. The Conference also noted that regional implementation of security requirements varied substantially with less than 50% of States in three (3) regions falling short of meeting the ICAO’s compliance targets. This suggests that all Member-States must make a significant effort to achieve improvement in their aviation security systems and for ICAO to achieve the global pledge of 80 % of audited States.

The Conference accepted for examination, in excess of thirty (30) Working Papers which were proposed by either ICAO’s Secretariat, other member-States, and regional partners and associations such as Airport Council International (ACI); International Air Transport Association (IATA); and Air Line Pilots Association (ALPA). The objectives of the Working Papers were many but advocated for newer strategies and methodologies to advance aviation security measures, processes and systems.

Minister Ferguson chaired the proceeding for ‘Day Two’ of the Conference which dealt with endorsement of ‘Conclusions and Recommendations’ emanating from the Working Papers presented on Day One. The Working Papers touched on several topical issues which are at the frontiers of civil aviation worldwide as well as impacting Guyana. Amongst the conclusions were: the issue of Cyber Security given that there are new and emerging Cyber-Threats which specifically threatens the aviation sector or aviation-related systems and businesses; and the need for effective and sustainable protection against cyber threats.

The importance of establishing and utilizing ‘Advance Passenger Information Systems’ (APIS) and Passenger Name Records (PNRs) were also the subject of several papers which aimed to encourage data collection and information sharing. This is largely seen as aiding the detection and movement of criminals including those involved in terrorism and Foreign Terrorist Fighters (FTFs) aligned to terrorist groups who may be the subject of interest. The conclusions and recommendations also advocated for greater collaboration and efficiency between border control agencies, law enforcement, customs and civil aviation authorities; and for such collaboration to transcend borders regionally and extra-regionally.

The Working Papers had also proposed improved measures to address the issue of Cargo Security as well as the ‘Insider Threat’ – an area of growing concern for the global aviation fraternity.  The papers also focused on the unique challenges that Chemical, Biological and Radiological (CBR) agents can pose to civil aviation operations; and, spoke to the potential misuse of ‘Remotely-Piloted Aircraft Systems’ (Drones) to carry out criminal acts or used as tools to support terrorism.

The Conclusions featured main aspects of the GASeP which are to: encouraged Member-States to work closely with the aviation sector to improve or develop effective Security Cultures; and utilize risk-based approaches for evaluating security threats and implementing risk management regimes for mitigating against those threats to civil aviation. Some of the Working Papers advocated for ‘One-Stop Security’ and ‘Recognition of Equivalence’ arrangements which, if effectively implemented, can result in ease of travel for passengers.

Guyana also lent its support to several Working Papers in areas such as ‘One Stop Security’ – an initiative which will be considered amongst some of the Caribbean Aviation Safety and Security Oversight System (CASSOS) Member-States in the Caribbean; and ‘Insider Threat’ another area of growing concern. Although supported, Guyana recommended some improvements to the paper. Also, the proposal of establishing an independent and specialized bureau within ICAO to focus primarily on addressing and developing Aviation Security was also supported by Guyana and other States given its crucial importance in the operation and sustainability of Civil Aviation or Air Transportation worldwide. Much support and commendation were also given to Singapore’s initiative to train Senior Personnel including Director Generals of the various regions with the objective of complementing their strategic goals and initiatives for security. The Conference concluded with a favourable Communique’ of which will be tabled before the ICAO Council for further consideration and approval ahead of the 40th ICAO Assembly in 2019.

Guyana had also received technical assistance from ICAO under the Aviation Security Improvement Plan (ASIP) which saw the GCAA benefiting (ASIP First-Phase) from the assistance of an ICAO’s Short-Term Expert earlier this year. The GCAA is continuing to improve its policies, programmes and regulations which will help Guyana to achieve full compliance with ICAO as well as attain the ICAO’s GASeP goals.