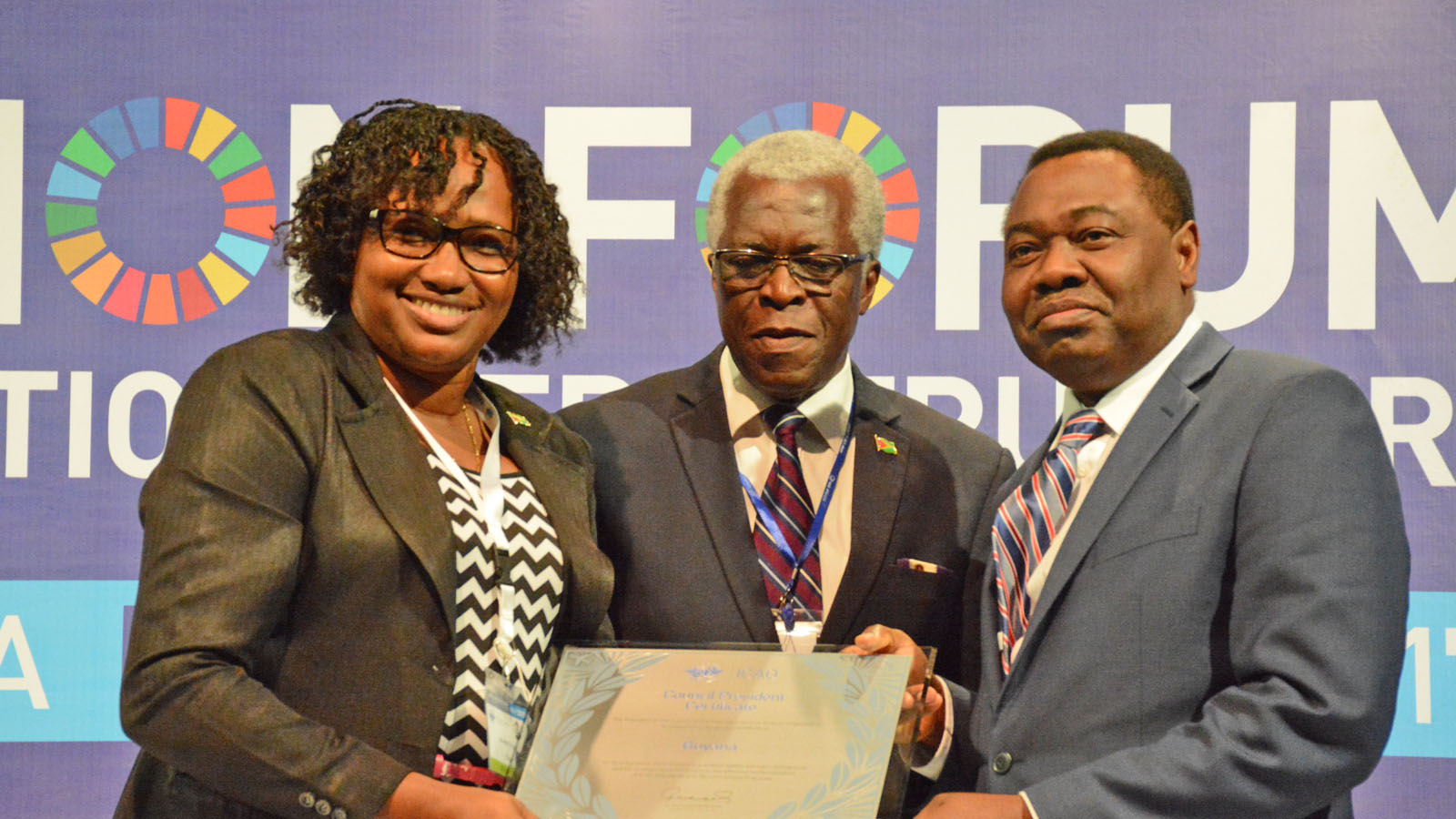 Guyana Recognised as Most Improved Member State at Aviation Forum

In recognition of the significant progress made in resolving safety oversight deficiencies and the effective implementation of the International Civil Aviation Organisation (ICAO) Standards and Recommended Practices (SARPs) in 2016, Guyana was awarded the Council President Certificate by the ICAO.

The presentation of the award was made at the ICAO World Aviation Forum 2017, held in Abuja, Nigeria, from November 20 to 22, 2017. Honourable Minister Annette Ferguson received the award from ICAO’s President, Dr. Olumuyiwa Benard Aliu. Also present at the Aviation Forum was Director General of the Guyana Civil Aviation Authority (GCAA) Lt. Col. (Ret’d) Egbert Field and the Director for Air Transport Management at the GCAA, Mr. Saheed Sulaman.

Council President Certificates are issued once each calendar year and recognises countries for significant progress made in resolving their safety oversight deficiencies and improving the Effective Implementation (EI) of ICAO SARPs.

In 2016, after an ICAO Coordinated Validation Mission (ICVM) audit, Guyana moved from 44.24% to 64.66% effective implementation of ICAO SARPs.

The award signifies that Guyana is closer to implementing ICAO’s SARPs, as well as achieving the United States Federal Aviation Administration’s (FAA) Category One status. The attainment of Category One status would mean that air operators from Guyana can once again initiate service to the United States, and take part in reciprocal code-sharing arrangements with U.S. carriers.

The award is also an indication that the GCAA is more equipped to discharge its safety oversight and regulatory mandate for the aviation sector more effectively.

Other countries receiving the Council President Certificate for their achievement in 2016 were Bolivia, Egypt, Honduras, Jamaica, Kazakhstan, Paraguay, the former Yugoslav Republic of Macedonia, Togo, Uruguay, Vietnam and Zambia.

During the ICAO World Aviation Forum, discussions were held between the Council President of the ICAO, Dr. Olumuyiwa Benard Aliu, and the Honourable Minister Annette Ferguson and her delegation. It was proposed that Guyana host the ICAO Air Transport Conference in the third quarter of 2018. It was further proposed that Guyana host the Third ICAO African States and Diaspora Meeting to focus on promoting tourism and air linkages between African States and the Diaspora, especially in the Caribbean States.

The conference will also address the challenges in overcoming irregularities or non-availability of air links between the two regions, revise and develop existing Bilateral Air Services Agreement, and explore opportunities for multilateral agreements using ICAO Air Services Negotiation (ICAN) facility, including trade and investment, science and technology, travel and tourism, and transportation infrastructure.